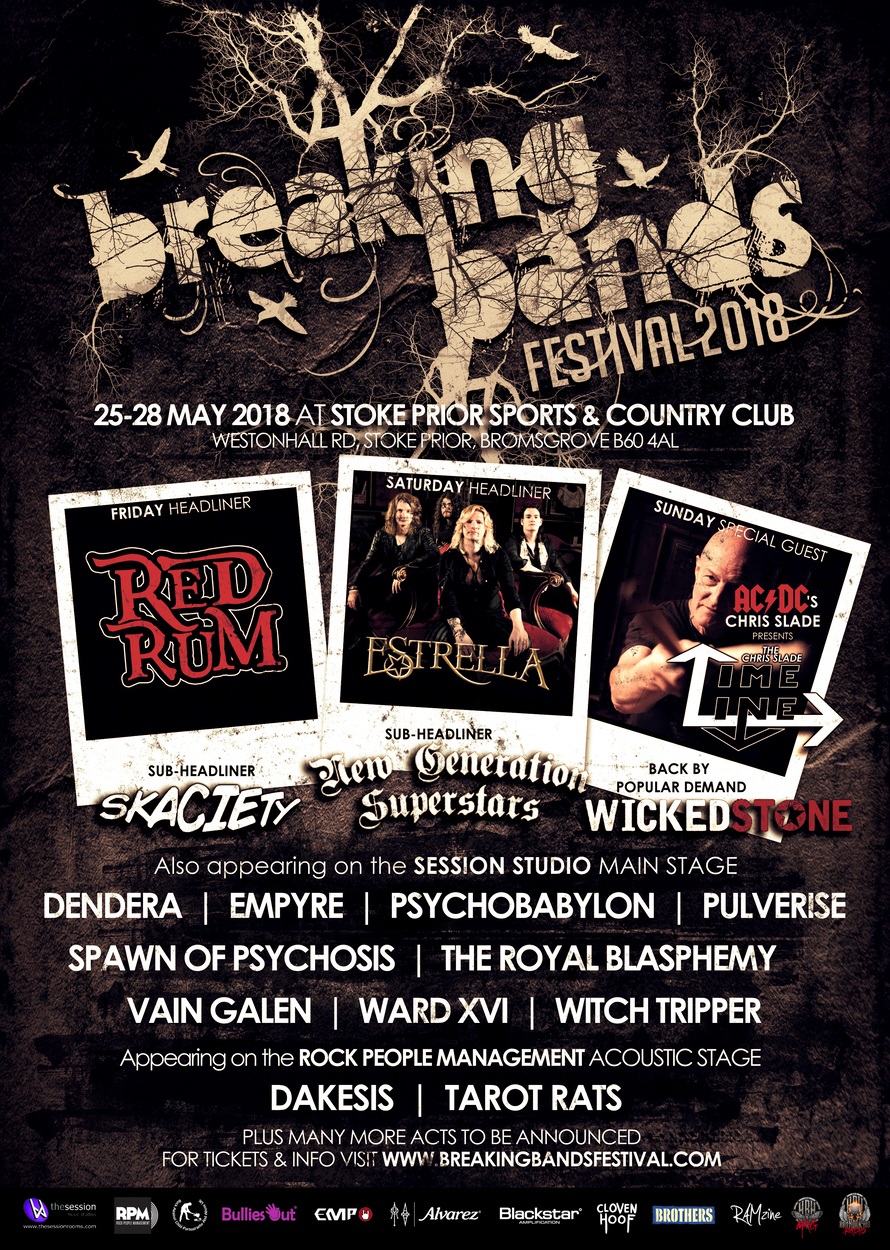 So the main camping festival season comes to an end over the August bank holiday and people are already planning their 2018 camping festivals. Breaking Bands Festival are pleased to announce a super 7 additions to the already exciting line-up for the 4th edition of the award winning festival.

Firstly, bringing the party core to the festival, from Leeds is a band that have fun playing their unique brand of infectious rap metal. We are excited to announce PULVERISE to the line-up. For fans of Skindred, Sumo Cyco and Stuck Mojo you are guaranteed to be always moving from start to finish of their set.

Next up, a 3 piece stoner/doom band from Nottingham getting booked up for everything at the moment and really making a name for themselves across the music world. After 3 years of fans asking, we finally have WITCH TRIPPER playing Breaking Bands Festival. For fans of Clutch, Black Sabbath and Led Zeppelin, there is plenty of groove to come from this trio!

We’ve already had the fan favourite band Wicked Stone confirmed to return as voted for by this years fans of the festival. We are now adding a festival crew vote as well. The small team work tirelessly all weekend from 10am until 2am and not a single complaint from them. It’s rare to see such dedication to the job, but its paid off as they won ‘Best Stage Crew’ at the Obscure Chaos-Zine Awards.

So with that, the crew unanimously voted back VAIN GALEN based on not just the quality of the band but their all round professionalism over the weekend. Their willingness to help out. The nothing is too much trouble attitude and the crew wanted repay this with an invite back. Who are we to say no? Vain Galen are a 3 piece hard rock band from London for fans of Therapy?, Helmet and Tool. With passion, energy and raw emotion, these guys had the crowd bouncing this year on stage 3 and they are set to do it again next year on the main stage.

Known for being a stand out live band at many festivals they have played and boasting support slots for bands such as Saxon, Queensryche, Anvil, Skindred, Sepultura and many others, this next band is a must see at Breaking Bands Festival 2018. Bringing us some old skool thrash, from Portsmouth is DENDERA. For fans of Iron Maiden, Judas Priest and Megadeth, Dendera will be ready to make some noise to impress the masses.

So that just leaves us with Saturday night… a trio of awesome bands combining hard rock, sleaze and a smidge of glam too! Dedicating Saturday night to the quite well known and well loved Stevi Rox as he starts his 50th Birthday celebrations we introduce the ‘sleazy-trash-glam-punk-classic-rocknroll’ party!

So to begin the trio we introduce to you PSYCHOBABYLON, a 5 piece hard rock/punk band from Leeds. Describing themselves as a 10 legged rock n roll machine who will take your senses on a rock rollercoaster ride, these guys are energetic and ready to bring the party game! For fans of 3 Colours Red, Backyard Babies and Alice in Chains.

Part 2 of the party brings the return of the sleaze and glam of Nottingham’s finest, NEW GENERATION SUPERSTARS. The band appeared on the acoustic stage in the first year of the festival back in 2015 but the guys have been attending the festival ever since as fans of the music. For those who haven’t managed to see this award winning band over the past 10 years, you will be in for a treat as they sub-headline Saturday evening. For fans of The Wildhearts, Social Distortion and Backyard Babies.

And to end this announcement with our Saturday headline band, we bring one of the best Scottish bands to the festival. Having tried and failed for many logistical reasons the past few years, we have finally got pen to paper and proudly announce ESTRELLA will be bringing their full on energetic music awash with melody, riffs, thunderous beats & anthemic choruses – a fresh new rock sound for today! With influences ranging from Def Leppard, AC/DC, Van Halen, Aerosmith and Bon Jovi you can be rest assured that Saturday night will end on one hell of a party!

It’s not too late to apply to play the festival if you are a band in the UK. Go to the website and fill in an application but hurry as applications will be closing in September.

Glamping is now on sale with fully furnished complete glamping tents available for less than £200 for the weekend. For glamping booking and for weekend tickets, go to http://www.breakingbandsfestival.com