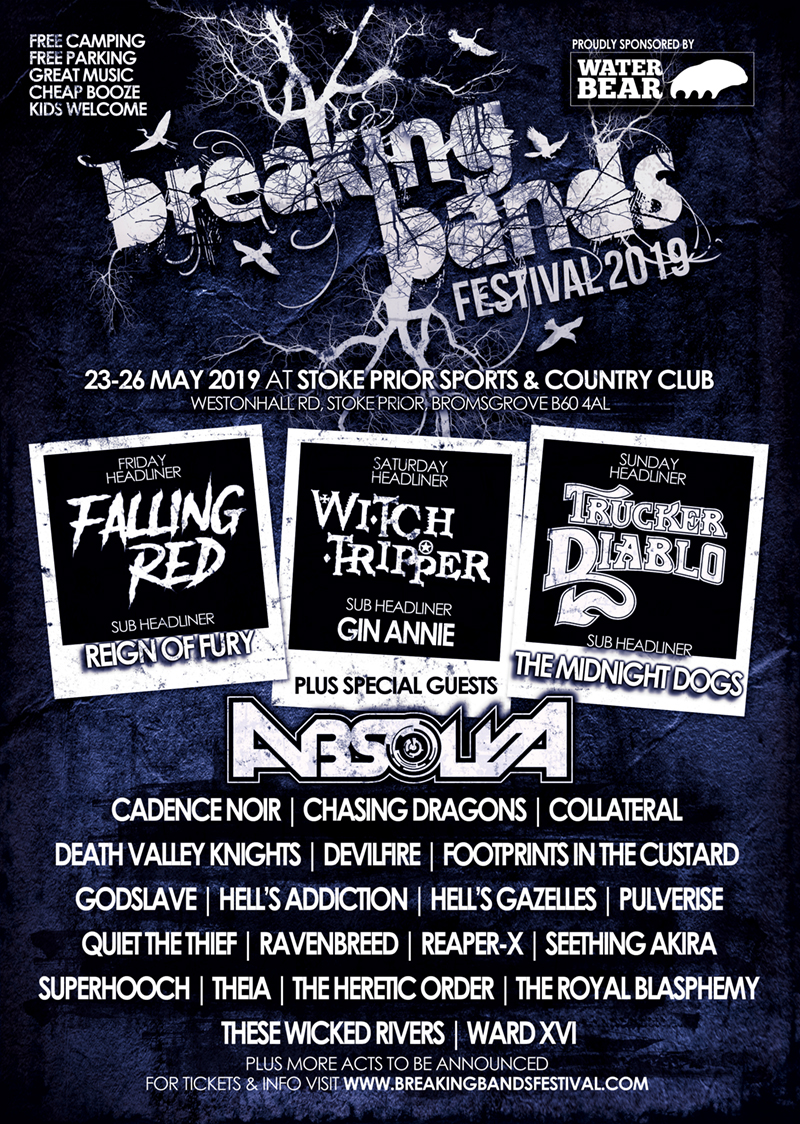 With the news still freshly circulating that Breaking Bands Festival was granted a license extension, the buzz is once again off the scale in the community group. We thought now would also be a good time to make a few announcements of bands and start shaping the event for 2019.

Firstly, the main stage. Midlands band Valous announced this week that they are calling time on their career as a band. We were very saddened to hear this as they have been attending the festival since day one and always party with the rest of us. We do wish the band members the best of health and hope they will still attend as family next year.

Its hard to find a band to fill the boots of a fan favourite but we think we have found the solution. They headlined the second year of Breaking Bands and now they are back as sub-headliners on the Friday night. We are honoured to welcome back REIGN OF FURY.

Onto the second stage and bands that have not played before. We had thousands of bands applying to play and it has taken a long time to put together a choice of bands that we have. Kicking off with Midlands based hard rockers THESE WICKED RIVERS who take their influences from Crobot, Black Stone Cherry and Clutch, these guys really do pack a punch on stage. Also from the Midlands, mixing up rock, glam and sleaze is DEVILFIRE who will absolutely own the stage and the ears of the fans.

Next up we introduce Welsh rockers RAVENBREED who bring with them sounds of Alter Bridge, Blackstone Cherry and Alice In Chains, these boys will take rocking to another level with their passion and infectious energy. Next stage 2 announcement comes in the form of thrash metal band REAPER-X from Northampton. Ears were pricked when seeing their application said for fans of Iron Maiden, Judas Priest and Lamb of God. A great sound and excellent stage presence another band we are delighted to introduce to the family.

Last but not least for this announcement we introduce COLLATERAL who we have been keeping a keen eye on over the last few months. Hard rock band from Kent who bring to the stage a superb sound but with such a wide range of influence in music. For fans of The Eagles, Bon Jovi and Tyketto, if these guys don’t get you rocking, then nothing will!

As mentioned above we have announced Reign of Fury as sub-headliners on Friday. We add to that Gin Annie as Saturday sub headliners and The Midnight Dogs for Sunday sub-headline, it makes the festival take even more shape. Oh, and just to put the icing on the cake, fan favourites SUPERHOOCH have agreed to open the festival stage Friday night. WHAT A WEEKEND!!!

We have plenty of tickets available right now so make sure you grab one. If it wasn’t for the extended capacity we would have already been sold out by now.