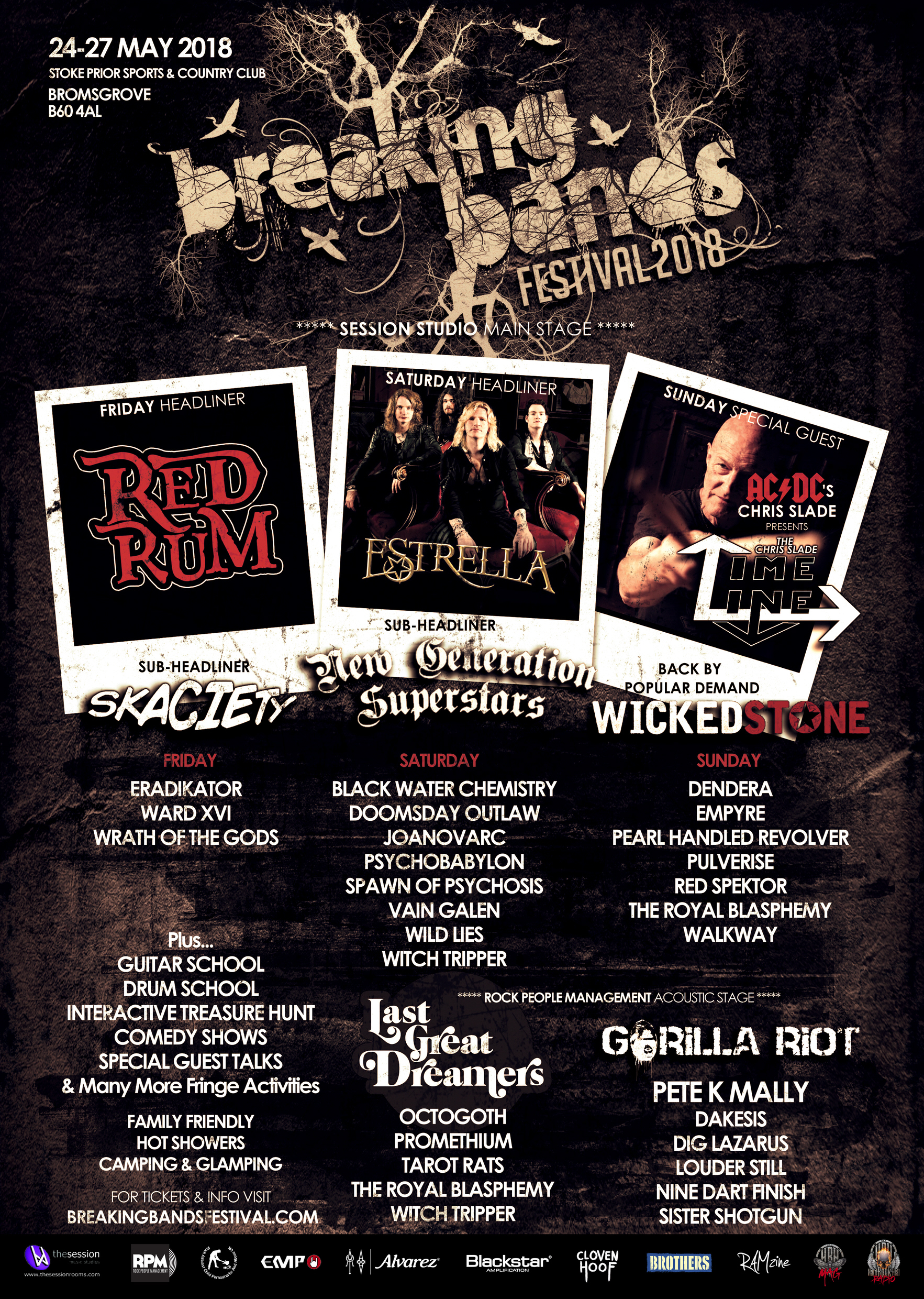 We are delighted to confirm the full line-up for Breaking Bands Festival 2018 along with the day splits to help those who can only manage one day.

Let’s start with the Rock People Management Acoustic Stage. Having already announced Tarot Rats and the return of Dakesis as Dakoustic, it gives us great pleasure to add 10 more bands for the acoustic stage. We have scoured the country to bring something magical once again for your entertainment pleasures and we can firstly announce that main stage bands Witch Tripper & The Royal Blasphemy will be making an appearance on the acoustic stage.

Witch Tripper performed their first acoustic set ever recently at HRH Doom vs Stoner and we were delighted with their performance and had to ask them to come and do it again for the BBFest crowd. Witch Tripper are for fans of Clutch, Black Sabbath & Led Zeppelin. The Royal Blasphemy coming over from Portugal are making a full weekend of it and will be performing some of their brilliant songs in a more haunting style that will wow the crowd. The band are for fans of Motorhead, Drowning Pool & Korn.

From Lancaster is a fantastic hard rock band that will definitely make the main stage at some point but were stunning at SOS Fest this year with their acoustic performance too. We are excited to have Promethium on board, for fans of Metallica, Annihilator & Testament

A new band to us is Reading’s Louder Still. Another hard rock band turning their skills to acoustic and one to definitely watch out for wherever you go. A band for fans of Iron Maiden, Airborne & Inglorious. Next to Hinckley near Leicester for another band that is new to our team. Dig Lazarus is a hard rock band with a fantastic sound and great stage presence to get the crowd rocking. For fans of The Virginmarys, Monster Truck & Royal Republic

Now to a quartet of Midland based bands, some you may have heard of and some for you to discover. Kicking off with Octogoth from Coventry – something of a curve ball which includes members of the garage-rock band Superhooch. Some may have seen a sneak performance from year 1 when they played an acoustic set in the campsite at 2am – for fans of The Residents, Ween & Petrol Bastard. Alongside them we have the stunning Sister Shotgun who really impressed us at HRH’s Highway to Hell final in Sheffield. Sister Shotgun are for fans of Halestorm, Bullet for my Valentine & In This Moment – another band you can expect to see on the main stage in the future. We also have another new band to us called Nine Dart Finish, a 3 piece stoner rock band from Birmingham for fans of Weezer, Queens of the Stone Age & Supergrass.

The subject of Birmingham leads us nicely into our Saturday night acoustic headliners, the wonderfully talented Last Great Dreamers, who will be kicking off the early evening entertainment with their great mix of rock, glam and sleaze. LGD are especially for fans of Redd Kross, Cheap Trick & The Quireboys

That leaves just the Sunday night acoustic headliners for the band that won the Rock People Management acoustic video competition. From Manchester we introduce to you a stunning Southern dirty blues rock band called Gorilla Riot. Absolutely amazing sound to this band and one that we really look forward to seeing more of over the next year.

Onto the Session Studio Main Stage. A quote we have seen many times over and something we believe to be true “a gig is only as strong as your opening band“. We always think long and hard about the opening band of the festival each year. A band that can own the stage, get the crowd into gear and set the benchmark that the rest of the bands have to try and reach. 2018 is no exception to this rule. A band that could (and in the future very likely will) headline Breaking Bands Festival will be opening next years event with a thrashtastic set. We are thrilled and honoured to announce that Eradikator will be kicking things off for us on the Friday night! For fans of Metallica, Mastodon & Testament.

Following on from Eradikator we bring in Birmingham rockers Wrath of the Gods. A fairly new band to the scene but one that is making a massive buzz right now on the festival circuit and one we are excited to be bringing into the family. For fans of Iron Maiden, Judas Priest & Metallica.

Frontier Records see something in this next band as they signed them to their label. We too see something in the hard rock and doom band from Derby Doomsday Outlaw. They will be on tour during the month of May with Jizzy Pearl’s Love/Hate but stepping out to come and play for us. For fans of Black Stone Cherry, Led Zeppelin & Alter Bridge.

We always love a good female rock band at BBFest and this band has to be one of the best. Having seen them perform at their album launch last year and many times since, it was a no brainer to invite the delightful JOANovARC to join us next year. If you like Joan Jett and the Blackhearts, Girlschool & AC/DC then this band is not to be missed.

Breaking Bands Festival is all about mixing things up and this next band are definitely something different for the festival. Are they rock, are they blues, are they prog? The answer is a bit of everything. They have been wowing crowds for a fair few years now and we are honoured to be welcoming Pearl Handled Revolver to the festival. Especially for fans of The Doors, Queens of the Stone Age & Deep Purple.

We mentioned earlier about seeing bands at HRH Highway to Hell. The festival Directors have seen over 1,000 bands between them this year and every time they see a good band performance they check if that band has applied to play the festival. This next band played that gig and although never won, they certainly impressed us enough to ask them right there and then (after they left the stage) to come and play. From the home of Skindred, Newport in South Wales we bring Black Water Chemistry for fans of Alter Bridge, Killswitch Engage & Architects.

Next up a band that played the acoustic stage this year. We were not going to invite back any more bands that had played this year but their performance in front of 3,000 people at HRH Doom vs Stoner last month was too good to ignore. One of the best gigs we have seen for a long time. So welcome back Red Spektor. For fans of Kadavar, Black Sabbath & Graveyard.

Finally, the last 2 bands to complete the announcement. Firstly we would like to announce Walkway, a rock band from Norwich who, in the words of Production Manager Steve Jacobs back in April this year, was “the best band of HRH AOR” which also featured Lita Ford, The Quireboys and FM. Very excited to see them on the stage of BBFest. Walkway are for fans of Aerosmith, Nickelback & Van Halen.

Now to one of the most promising rock bands the UK has to offer. If you like stomping riffs, ear melting solos and choruses to make the walls sweat, this may be the band for you. So last but absolutely not least, Wild Lies from London completes the Breaking Bands Festival 2018 line-up. For fans of Bullet for my Valentine, Alter Bridge & Black Stone Cherry.

I think everyone will agree these additions really do make the award winning Breaking Bands Festival one of the best line-ups of 2018 for emerging talent, grass roots rock and promising future headliners of major festivals.

Adding to the awesome line-up we also have special guest talks from RACPA UK, comedy shows from Pete K Mally, a guitar school with a special guest tutor to be announced, a drum school for all ages hosted by TJ of Without Grace, Quiz night, interactive treasure hunt and lots more fringe activities for all the family. Also just announced is our Saturday night fancy dress which will be 80’s hair metal night. Bring on the spandex and big hair with prizes to be won too.

Tickets are on sale for day and weekend, campervan and glamping. Go to www.breakingbandsfestival.com for all the details.

FULL LINE-UP WITH DAY SPLITS (not in stage order):