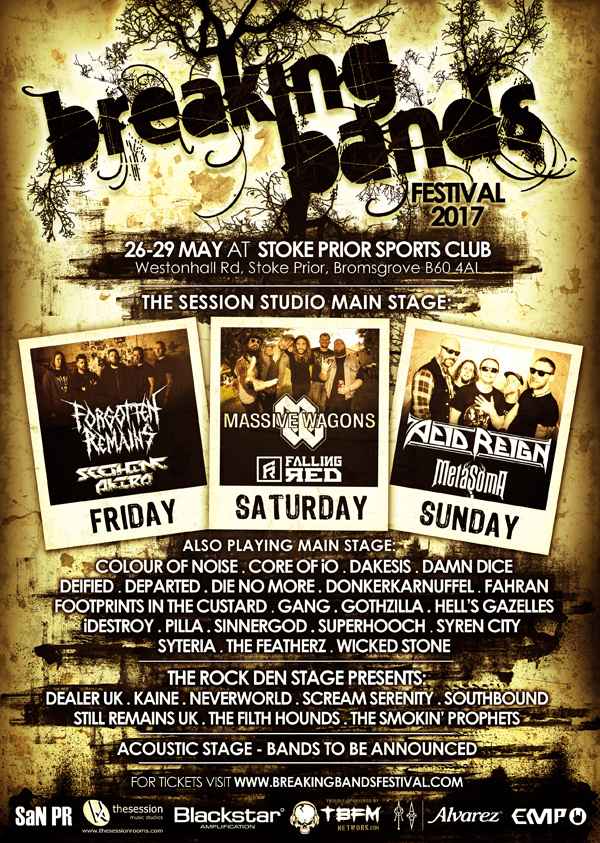 As promised, next year’s BREAKING BANDS FESTIVAL will be the biggest to date. Held at the Stoke Prior Sports & Country Club in Bromsgrove, on the late May Bank Holiday, 2017’s event will house the best new and up-and- coming Metal, Punk and Rock bands to the general public.

But just when you thought nothing further could be announced, Breaking Bands Festival have teamed up with The Rock Den, a music venue based in Hatfield, Hertfordshire, to bring an exclusive third stage. This will be an outdoor full electric stage in the main arena area on both Saturday and Sunday and will feature bands that have played The Rock Den. Dean Archer, organiser of The Rock Den said “It is a great honour to be on board with such a fantastic event. Being able to bring along our Rock Den fans to something on a bigger scale helps the bands and gives them that bigger platform they have been working so hard to get.”

Dealer UK and Neverworld will be the headline bands, and the stage will also host six more bands including: Kaine, Scream Serenity, Southbound, Still Remains, The Filth Hounds, and The Smokin’ Prophets. Even with the announcement of this new stage, there is a guarantee that there will be NO BAND CLASHES throughout the whole weekend. With 50% of tickets already booked and with only a very limited number of glamping tents left, next year’s event will definitely sell out. All details on tickets and bands are on the website https://breakingbandsfestival.com and to purchase your tickets, visit https://breakingbandsfestival.com/shop .