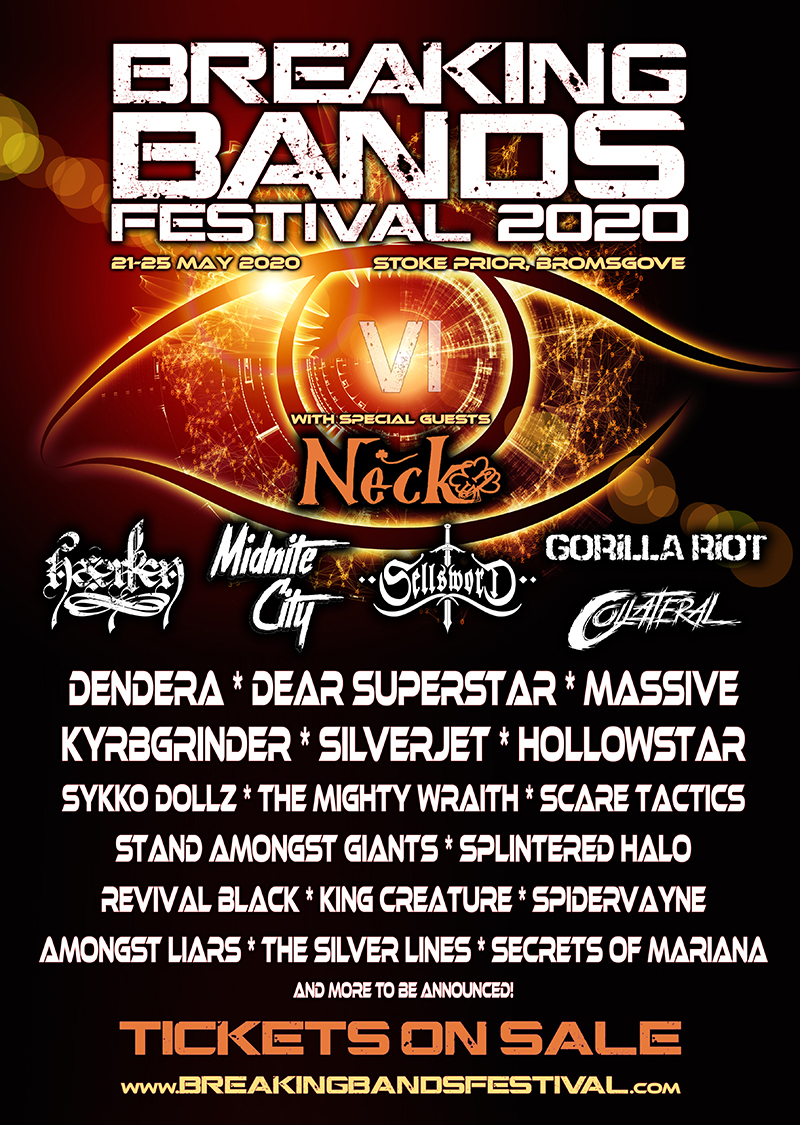 The Summer festival season is drawing to a close as we start the indoor season now. Still lots going on up and down the country and so many awesome bands to see!

As previously announced, all 4 festival Directors met up earlier this month in the sunny shores of Ibiza for a festival meeting (any excuse huh!) regarding next year and beyond. We have now fully cemented our plans that take us right up to 2024 which will be our 10th Anniversary and all of which will be at our amazing home of Stoke Prior, Bromsgrove with that wonderful backdrop of the Worcestershire hills.

So, after much chatter we got into looking at the bands for Breaking Bands Festival 6. With over 2,100 applications we knew this was going to be another tough one so with the beers cracked, the speakers cranked, we got down to the watching and the listening and wow… some amazing stuff out there that we had not discovered!

We decided to go with 10 bands that really stood out first time to us. Some we knew, some we’d seen elsewhere and others we are taking a good old fashioned punt on, its what we do!

The first band we are announcing is a band that played way back in 2015 at the very first event. Why bring them back now? Well, they couldn’t play this year on our Anniversary event and they were one of the most requested so we had to. Plus, the bass player brought Mr Badaxe to tears on stage… they were that good! We are talking about the 3 piece London metal band known as Kyrbgrinder fronted by none other than Threshold’s Johanne James, the singer and drummer of this absolutely kick ass band. If you missed them first time, you must not do the same again next year. Here’s a video of the band:

A band that was supposed to feature this year on the Rock n Growl stage, but with last minute changes to the band had to pull out, were promising band Saint Apache. Described by Alex Baker of Kerrang! as “A band that sound like they’ve grabbed Rage Against The Machine, The Gallows & Queens of the Stone Age. Stuck them all in a cocktail shaker” we were so gutted they couldn’t play so we held them a slot for 2020 as long as the band got sorted…. it has and will be under the new name of Amongst Liars with new lead singer Ian George of Katalina Kicks. We are stoked to hear they haven’t given up and we are counting down the days to rock out with them!
*video coming very soon*

A new name for some of you but maybe not all according to our research is a band called The Silver Lines. From Birmingham, this 4 piece punk band describe themselves as being for fans of early Kinks, The Rolling Stones and Iggy and the Stooges. That certainly grabbed our attention and this video gives a feel of what these guys are about:

Next up we are very excited to announce a band that are really starting to make a buzz in the rock community. A 4 piece grunge metal band from Essex called Spidervayne are taking the stages by storm. With influences of Soundgarden, Alice in Chains and Stone Temple Pilots, the band are quoted as saying “If you don’t like us we just turn up louder anyway, because if you can’t beat ’em, annoy ’em”. They certainly won’t be annoying as they step out on stage next year. Here is one of the videos of the band:

Its always good to mix up the genres and give people a different taste of something they may not usually see. So inviting a blues rock band into the festival is something we have done every couple of years and it has always been a refreshingly good experience for all the family. Stand Amongst Giants are no strangers to the festival scene at all and have impressed the organisers on more than one occasion at other events. We were delighted to see their names were on the applications when going through the lists. With a barrage of huge riffs and groovy blues rock SAG will have heads turning in 2020 with their new line-up changes now in place. The guys say they are for fans of Led Zeppelin, Audioslave and Rival Sons. Watch out for them… they will blow you away!
*video coming very soon*

Here is a Soundcloud link: https://soundcloud.com/standamongstgiants/sets/stand-amongst-giants

Hailing from sunny Glasgow we introduce this next band. They describe themselves as character metal (watch the video and you will fully understand) and liken themselves to Avatar, Gogol Bordello and Infected Rain. The band, Splintered Halo will bring a very different type of metal to the festival, something that none of the fans will have seen before; character metal. They design a song from the ground up to fit their chosen character (Harley Quinn, Pennywise, Regan MacNeill of The Exorcist to name but a few). The lyrics, the music, the dialect, and the voice itself is built carefully to emulate the character and tell their tale. They draw on various genres, e.g. circus music for Pennywise, baroque for Elizabeth Bathory, and then they blend it all with metal. Check out this video of the band:

From Liverpool, a 4 piece rock band for fans of Alice In Chains, Alter Bridge and Pantera is Scare Tactics. A band that has been around the block more than once with appearances at Download and Bloodstock firmly placed on their impressive CV. They mix melodic and aggressive vocals with powerful and memorable riffs. Their impressive dual guitar harmonies wail over a heavy grooving rhythm section. Here’s a video from the band:

Let’s stick with Liverpool but change the sound now with this next band. We are super stoked to announce the very impressive Revival Black to the festival. Can be likened to Bad Company, Free and Whitesnake but if you witnessed them out in Ibiza absolutely owning Ibiza Rocks Cafe in May this year, you will know they can absolutely rip the stage apart with high energy, modern rock and roll with classic rock running through it’s veins like a stick of Blackpool rock! Check Revival Black video:

Back to Birmingham now as we would like to introduce Secrets of Mariana who have been recommended to the organisers on more than one occasion. Combining huge catchy riffs, beefy drum tones and a voice that effortlessly flits between aggressive screams to soft melodies, Secrets of Mariana create a vibrant and refreshing sound. For fans of Flyleaf, Marmozets and Killswitch Engage, this is a band to watch for with new material being released in early 2020. Here’s a video from the band:

Last but by no means least is a band that have probably played more gigs than the organisers have had beers! From Sheffield its the dirty rock n rollers Silverjet! The band have supported some of their very own rock hero’s such as Buckcherry, The Quireboys, Bonafide, Hanoi Rocks, Gilby Clarke, The Wildhearts, The Dogs D’amour, House of Lords, Pretty Boy Floyd, White Lion and Mountain amongst others. The band’s live shows really illustrate what they’re best at. Each gig is played with the same utter commitment and enthusiasm, matched with a genuine enjoyment that is totally infectious. Seeing a Silverjet show reminds you of just why you love rock music in the first place and leaves you sweaty, with aching feet, a sore throat, ringing ears and a huge grin. Check this video from Silverjet:

We still have more bands to watch, more to check out and more to announce including the all important acoustic stage bands. Watch out for those over the coming months. In the mean time, please give the poster a share, watch the band videos and tag your friends. Breaking Bands Festival is certain to sell out in 2020 just like in the first 5 years.

Tickets can be purchased as always, from the website with no booking fees, no postage fees, no extra costs at all! www.breakingbandsfestival.com

Another Festival Announcement – Bring on the Acoustics, the Punk and the Dirty Rock n Roll!