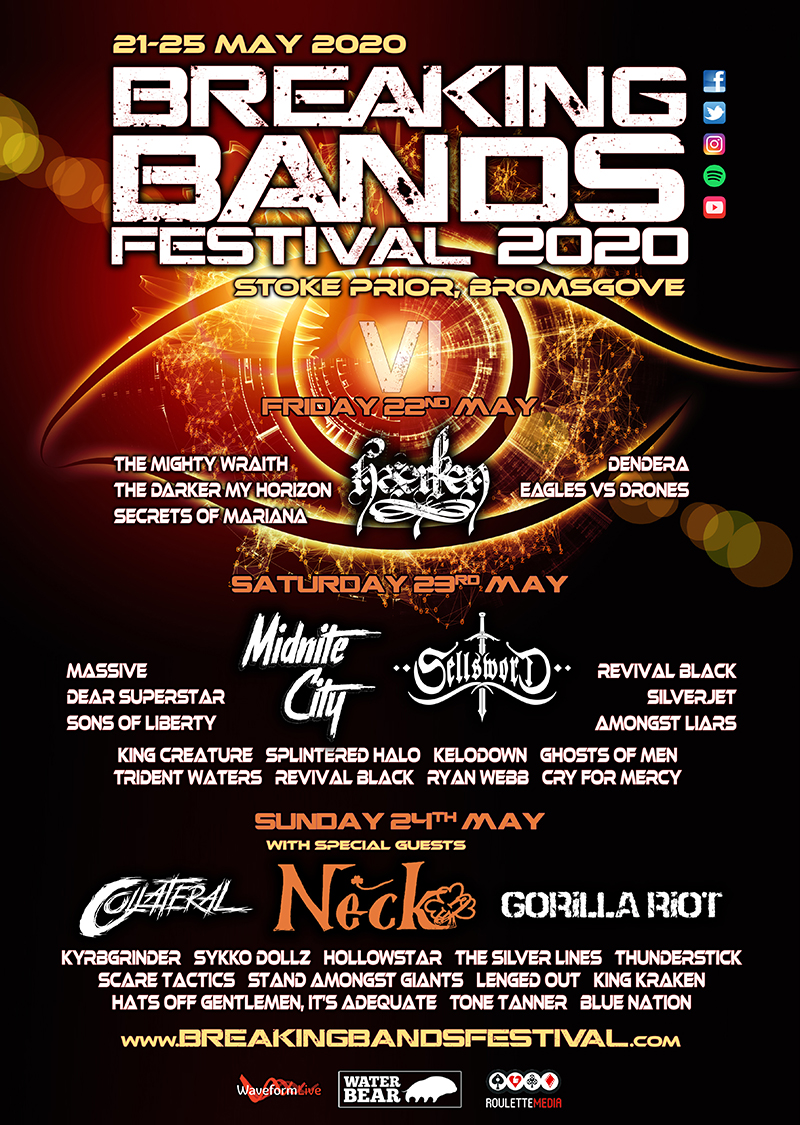 With just 10 days until Christmas and the fact that the festival is all but sold out, we felt it time to give the full and final line-up announcement for the 6th edition of Breaking Bands Festival taking place in their musical home of Stoke Prior, Bromsgrove 21-25th May 2020.

With 3 stages of bands including the beloved acoustic stage, there will be plenty going on all weekend but again the organisers have managed to put together a none stop weekend of entertainment with no band clashes at all.

Starting with the main stage, introducing Eagles vs Drones, a 5 piece rock band from the Midlands bringing their style of 90s rock to the festival on the Friday evening. Also on Friday night we complete the evening line-up with The Darker My Horizon who released their third album Seize The Day this year. The band are making waves right across the UK with their gig calendar already filling up for 2020.

Saturday sees 3 stages open at once with no less than 16 bands performing from 11am to midnight. On the acoustic stage which opens traditionally at 11am for breakfast, we start with Cry For Mercy, a hard rock power trio in the mould of some of the classic bands of the 70s but with a very modern vibe and priding themselves on their live performances. This band know how to play and entertain. We also have Ryan Webb acoustic. While Ryan Webb’s sound cannot be placed under any one single rock genre (at the moment), his music is really exciting, guitar-driven with belting vocals and incredibly long notes that will have you holding your breath for what seems an eternity… and left wondering how on earth he does it… while playing some pretty special guitar riffs! Making up a trio of acoustic bands on Saturday is a band who will double up with an electric set on second stage but their acoustic set has become a thing of beauty in its own right so we are delighted to have Revival Black with us acoustically too!

On stage 2 Saturday we bring in two more bands to complete the line-up there with Trident Waters, a blues rock band from London described by Classic Rock Magazine as ‘Combining Terrorvisions pop-rock sensibility, Reef’s bluesy grit and the vocal class of a Chris Cornell in waiting’. Also joining them will be Ghosts Of Men, a 2 piece alt-rock band from North Essex. They have played over 120 festival stages over the past 4 years so they are far from new to the scene with BBC’s Stuart Turner saying they are “Like a two piece Queens of the Stone Age if Queens of the Stone Age were entirely composed of Morecambe and Wise”.

Over to the main stage and opening the day is KeloDown, hand picked by music education college WaterBear. KeloDown are a five piece hard rock outfit hailing from the suburbs of Bury St. Edmunds, delivering punchy riffs and energy by the bucket load. Raucous rock and roll at its most unrefined. Also taking to the main stage describe themselves as the UK’s most notorious original hard Southern rock band. We cannot argue with that statement as we welcome Sons Of Liberty to Breaking Bands.

Onto Sunday and again, introducing more bands across all 3 stages starting once again with a fantastic early start to the day on the acoustic unplugged stage. He performed at the very first Breaking Bands but since has been working at another festival but its so good to see the return of local one man noise machine and king of the slide guitar, Tone Tanner. Along with Tone, another solo act as Malcolm Galloway joins us from the superb progressive rock band Hat’s Off Gentlemen, Its Adequate. Rounding off the trio of acts on the acoustic stage is Blue Nation, from Birmingham. They use riff based melodic rock influenced by The Beatles, Cream, Zeppelin, Brit Pop 90’s, more recently Rival Sons and Vintage Trouble, to create their memorable sound.

On stage 2 Sunday we introduce another band recommended highly to us by the WaterBear music college Called Lenged Out. Lenged Out are a hardcore/beatdown crossover with influence from doom and stoner metal. From Southampton, they are a four piece with aggressive vocals and sludgy breakdowns.

Finally to the main stage and a band brought in as a replacement as we have had to sadly lose Spidervayne from the bill. Taking their place is a band who have definitely been around the block with rock royalty more than once as we say hello to Thunderstick for the first time. Before Thunderstick there was Barry Graham Purkis, an English drummer who played with such bands as Tiny and the Hot Toddies, The Primitives, Archer, OZ and then finally Iron Maiden. He also enjoyed a stint with Bernie Torme`s Electric Gypsies. It wasn`t until his inclusion in the band Samson that the character, Thunderstick was born, becoming a focal figure for the the emerging NWOBHM movement. Playing from inside a cage,the masked drummer would `break out` during Samson gigs to terrorise audiences. Let’s see what they have in store for us next year! And last but not least, a band from South Wales that has been impressing people up and down the country this year which is why they have been getting more and more invites to play festivals. Finishing 3rd (by only 0.04% vote difference!) in HRH’s Highway to Hell competition in Sheffield, the band blew away the BBFest organisation team and were immediately invited to play Breaking Bands Festival. Their stage presense, their music and their original style is something to savour and with their heavy riffs and catchy anthemic tunes, this 5 piece rock band will blow the roof off.

We have once again made 2 playlists with the full list of bands playing the festival in 2020 with Spotify and Youtube so you can watch, listen and love the music where ever you go!

Breaking Bands Festival will once again be sponsored by WaterBear Music College. Working with Bruce Dickinson (former Little Angels and Colour of Noise guitarist) has been a great education (excuse the pun) and we are delighted to again be partnering up with Bruce and his team. Waveform Live will be sponsoring the main stage for the 6th year running. They have been a massive help with the festival and it is always great to be backed up by their team. The second stage in 2020 will be known as the Roulette Media Stage. We are very excited to be working with Vivanne and her team who represent some of the best rock talent in the country including the highest voted band to return, Collateral. Vivvane and her team will no doubt be looking closely at the bands playing and maybe signing one or two as well.

We’d like to thank our sponsors in advance for putting their faith in Breaking Bands Festival and helping us push bands to the next level. This is what we do, this is what we always wanted to do. As one member of the media once said of Breaking Bands Festival ‘You don’t need big flashy gimmicks if you’ve got great music and great people – and this place has it all.’ (Moshville Times).

So that is it, line up complete. More news in the new year about the traders and the rest of the weekend’s entertainment. Happy Christmas from all of us at BBFest HQ. Don’t forget tickets from the website, only about 2 dozen tickets left at http://www.breakingbandsfestival.com

BREAKING BANDS FESTIVAL 2020: A CATCH UP OF WHAT’S IN STORE THIS YEAR

BREAKING BANDS FESTIVAL 2020: A CATCH UP OF WHAT’S IN STORE THIS YEAR