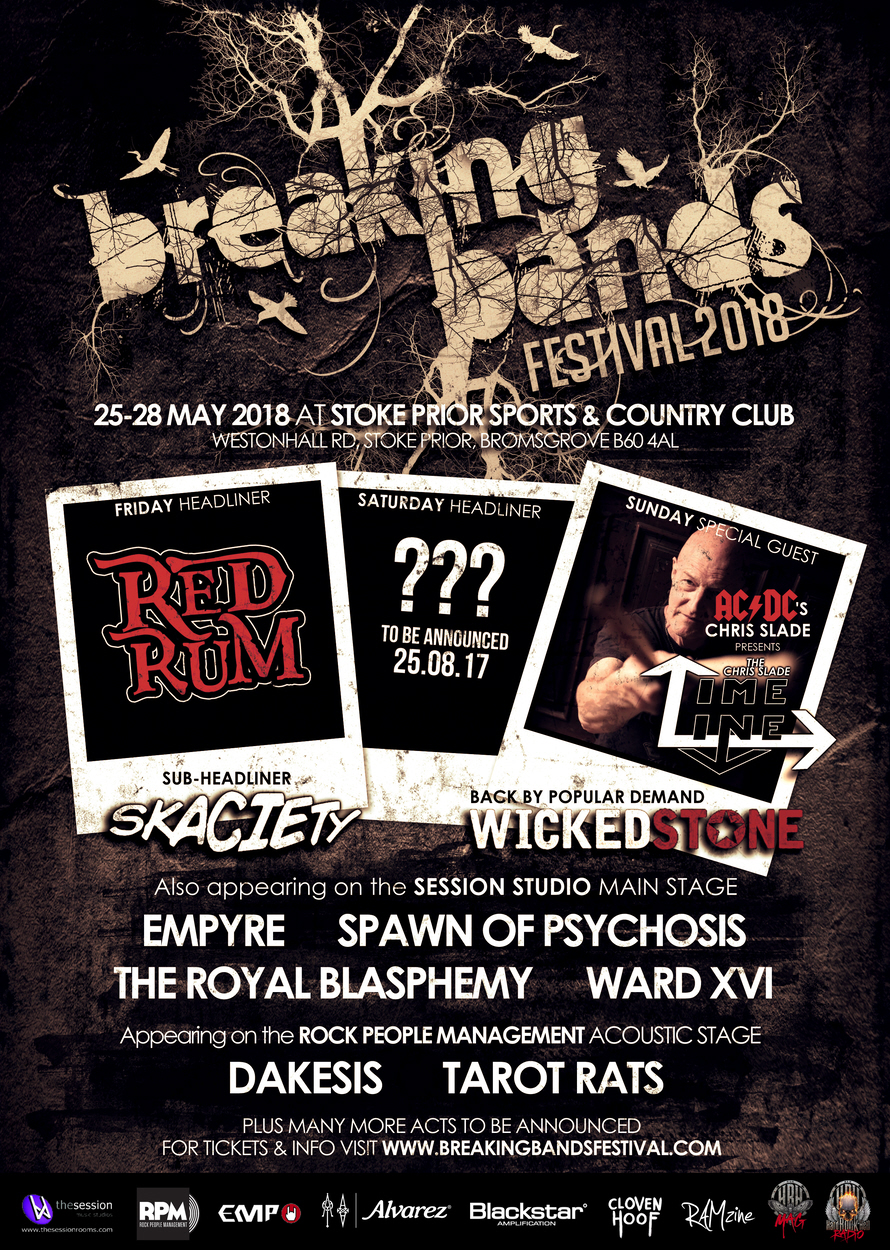 With less than 300 days to go until Breaking Bands Festival 2018, the team are in full swing with the preparations. Over 800 bands have now applied for the 40 places on offer making it the most difficult of years to be part of the bill with a 1 in 20 chance of getting the nod to play.

Having already announced special guest Chris Slade of AC/DC to close out next years festival over 25% of the tickets have already been snapped up by returning festival goers as well as some new faces. Now to add another 9 bands to the list. The organisers have gone with a different approach for the festival line-up to most festival traditions of putting up big name bands to entice ticket sales. Breaking Bands Festival is not about that, its about discovering your new favourite band and with that needs to come some relatively unknown bands along with a few festival favourites.

Kicking off the announcement with the 2017 most popular band as voted for by this years ticket holders. Each year we ask the fans for the best performance of the weekend barring the headliners and this year they have voted heavily for one of the bands that 99% of the festival had never seen before. We welcome back for 2018… WICKED STONE. Blending their hard hitting riffs with blistering solos and powerful/melodic vocals, Wicked Stone are a five-piece Hard Rock / Metal band influenced by bands such as Guns n Roses, Alter Bridge, Black Stone Cherry and many more. We look forward to Wicked Stone returning as the sub headline band to Chris Slade on Sunday evening.

We have two bands returning by invite next year but reversing their roles as EMPYRE change from acoustic to electric and DAKESIS go the other way and become Dakoustic! Both bands really impressed and we felt it would be wrong not to give them a second shot at the festival in a different role. Dakesis are a power metal band from Birmingham who opened this year’s festival in style and are for fans of Symphony X, Nightwish and Kamelot whilst Empyre are a good old British rock band with influences ranging from the sound of Seattle in the 90s, and dirty blues rock. These boys are for fans of Royal Blood, Kings of Leon and Foo Fighters. We look forward to both of them returning.

While we are on the subject of the acoustic stage, we will also be welcoming a new band to the festival in the shape of TAROT RATS, a 5 piece band from Kent. Drawing from a spectrum of influences which include Led Zepp, Sabbath, the Beatles, David Bowie, Guns n’Roses and many, many more, Tarot Rats provide a colourful mosaic of musical variety.

Each year we invite one band from outside the UK to come over and represent the rest of the world and giving them a chance to break the UK music scene. From Lisbon in Portugal we have invited an extremely exciting and talented rock band called THE ROYAL BLASPHEMY. A fantastic band for fans of Motorhead, Drowning Pool and Korn.

We always look for something not in the mainstream at rock and metal events and as BBFest is not genre specific SPAWN OF PSYCHOSIS fit in perfect for their debut at the event. For fans of Nine Inch Nails, Rob Zombie and Ministry, SoP bring an exciting industrial metal element to the table that follows on from Seething Akira’s appearance in 2017. Hailing from Maidstone in Kent their music is a mix of old school, heavy riffs, synthesized drums and samples but with a vocal style more reminiscent of old punk bands. Definitely one of the bands not to be missed.

And now for a Friday night trio announcement. Something we do not usually do is announce the days bands are playing at such an early stage but for this triple header it was needed. Firstly, a band from Preston although quite easily could be from the Psych unit is WARD XVI. Recently confirmed to play Bloodstock Open Air after winning one of the Metal 2 The Masses competitions, this band bring a whole new spin on punk n roll and will definitely have you begging for more. In their own words they say… “With nothing but a steel barrier to separate you, would you dare come face to face with the UK’s most deadly psychopaths? They may look harmless and their music may be brilliant but I assure you these are dangerous criminals and will stop at nothing to get what they want.”

To follow on and our Friday night sub-headliners we introduce to you a fun ska-punk band known as SKACIETY. This is a young band but with a mass of experience on the stage having played Bearded Theory, Rebellion and Boomtown festivals. With sounds of Less Than Jake, Reel Big Fish and Goldfinger you know you will be on the dance floor from start to finish with these guys!

To end the first night on a high, we felt we needed something high octane with much crowd participation. A band the organisers know well, have seen many times and have always wanted on the bill in the past! Finally we can announce our Friday night headliners as RED RUM from Nottingham. This is a band of cut-throat pirates, epic vikings and blood-thirsty warriors! An intense six-piece folk metal band that combines a deadly mix of ultra low tuned 7 and 8 string guitars and beautiful mandolin and keyboard melodies, not to mention the epically powerful vocals. Red Rum have been added on the latest announcement for this years Bloodstock Festival too. Here’s a video of their full performance from 2015 to give you a full taster of what our Friday headliners are all about:

Remember, tickets are on sale now from the website www.breakingbandsfestival.com, via our free app and on Eventbrite prices at £40 for the full weekend including camping. Kids tickets are just £1 (under 14’s). Limited campervan space available to book but be quick as that sells out fast!

Check out the bands here:

OVER £350 RAISED FOR CHARITY AT BREAKING BANDS FESTIVAL

THE GET YOUR ROCK OUT ACOUSTIC STAGE FULL LINE UP ANNOUNCED