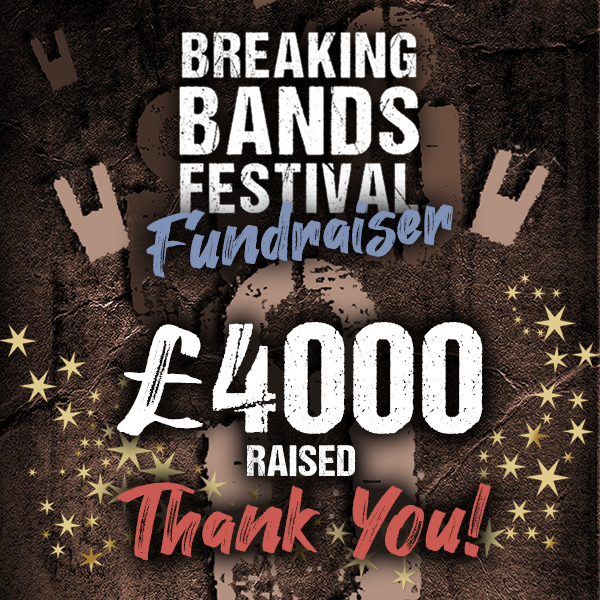 In just 12 months time, hundreds of people will be in full party mode as Breaking Bands Festival 3 year wait to continue the award winning event comes to an end (all being well). In the meantime, the team are extremely proud and super grateful to bands, media and customers for their support during the 2 month fundraiser started at the end of March 2021.

It was always going to be a tall order to raise the £5,000 that the team had as a target during such testing times for everyone both financially and generally.

So it gives us great pleasure to announce that barring a few pennies, the funraiser is closed with a fantastic £4,000 raised. This is an awesome tally and will go towards the costs that the festival has lost over the last 2 years in advertising funds, hire fees lost, licence for the festival, accountancy fees and more.

Festival Director Jay said “We had great hopes that the fundraiser could hit 50% of the target as that would at least give us a bit of the lost funds back but to reach a staggering 80% exceeds all our expectations and goes to show the true love and respect our festival community has for Breaking Bands Festival itself. Not only have they helped us raise much needed funds but they have bagged themselves some very cool merchandise and a superb double CD too!“.

The double CD album ‘What’s In Your Head?’ has sold over 300 copies not just in the UK but internationally too.

There is some more news coming very soon from the BBFest HQ regarding next years much anticipated return to the scene. More bands to be announced, more plans to be announced and more news about the next big step for the festival. In the meantime, from all of the team we can only once again say thank you for your continued support. Please all stay safe, enjoy the return to festivals and gigs and we look forward to seeing you soon.