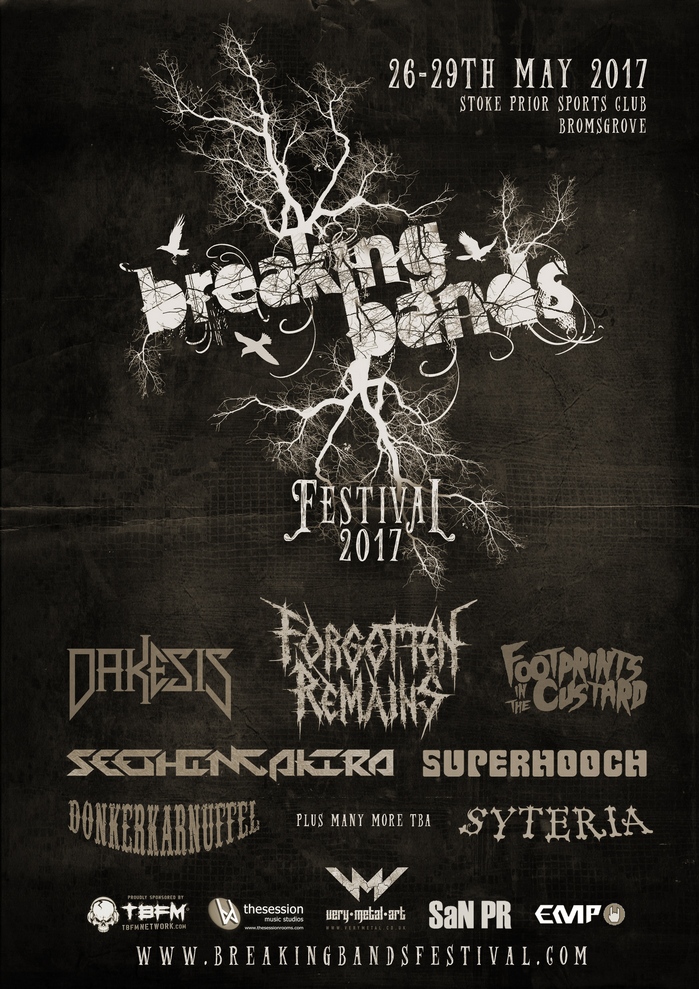 Today, we are pleased to announce the first seven bands confirmed for next year’s festival. They include Friday night headliner Forgotten Remains, the opening band of the event – Dakesis, Donkerkarnuffel (TBFM Factor 2016 runners-up), Syteria, Footprints In The Custard, Seething Akira, and the returning band from 2016 as voted for by the fans – Superhooch.

Hailing from Chesterfield, North Derbyshire, Forgotten Remains are influenced by the likes of Cannibal Corpse and The Haunted, and have been described as combining cut throat old school thrash with Scandinavian death metal. Forgotten Remains were crowned the winners of the 2015 East Midlands M2TM competition, and wowed crowds at last year’s New Blood Stage. They have also received glowing praise from TBFM Radio, Rockcast 100, and Metal Hammer Magazine.

For fans of: Slayer, Cannibal Corpse, The Haunted

Dakesis are a four-piece Progressive Power Metal band from Birmingham, UK. Formed in 2008, the riff merchants have toured the UK extensively and have enjoyed prestigious support and festival slots including playing with Edguy, Thunderstone, Blaze Bailey and Pagan’s Mind, and performing at Glastonbudget, Bloodstock Open Air 2012, Valkyrian Festival and headlining the Cackblabbath Stage at Wildfire Festival in 2015.

Ladies and Gentlemen, behold the magnificent deviancy of phantasmagorical proportions! Risen from the grave by the Great Entertainer, Donko. in life these musicians had performed in bands such as Spitting Blood and Unredempt, in death they have united and brought forth the cirque de mort and herald the coming of the Zombie Clown Apocalypse. Feast on the most spectacular event of your death!

Footprints In The Custard – https://www.facebook.com/Footprintsinthecustardband

Footprints in the Custard are five younger gentlemen based in Manchester, who continue to write and perform tongue in cheek ditties about various bodily functions, outlandish situations and bears. The music is derived from the band’s love of punk and metal. It’s stocked with riffs, shouting and wailing solos, and is designed to get fans boogying and generally wondering why the hell they’re doing it.

Portsmouth based five-piece hardcore dub steppers Seething Akira are a highly motivated band who are determined to show the world their style. These guys breathe new life into an increasingly growing underground scene. Their primary influences are blatant, with hooking beats like The Prodigy and a unique style akin to Enter Shikari. This band create something personal whilst proving the ability to become front runners in an ever growing popular genre.

For fans of: Queens of the Stone Age, Black Sabbath, Clutch

Featuring Jaxx from the legendary Girlschool and Keira of Straightshooter, Syteria are a rock band from the UK formed in 2015 who released their first single the same year. In 2016, the band dropped their debut EP Wake Up. Melodic and catchy, they will easily have you nodding your head and tapping your feet, will raise your spirits, and put a feel-good smile on your face for a long time!

For fans of: Paramore, Lower Than Atlantis, Girlschool

OVER £350 RAISED FOR CHARITY AT BREAKING BANDS FESTIVAL

SEARCH FOR THE SATURDAY HEADLINER – GUARANTEED TO BE PICKED FROM APPLICATIONS ONLY!

BAND ANNOUNCEMENT: THE COMMUNITY HAVE CHOSEN THE RETURNING BAND!