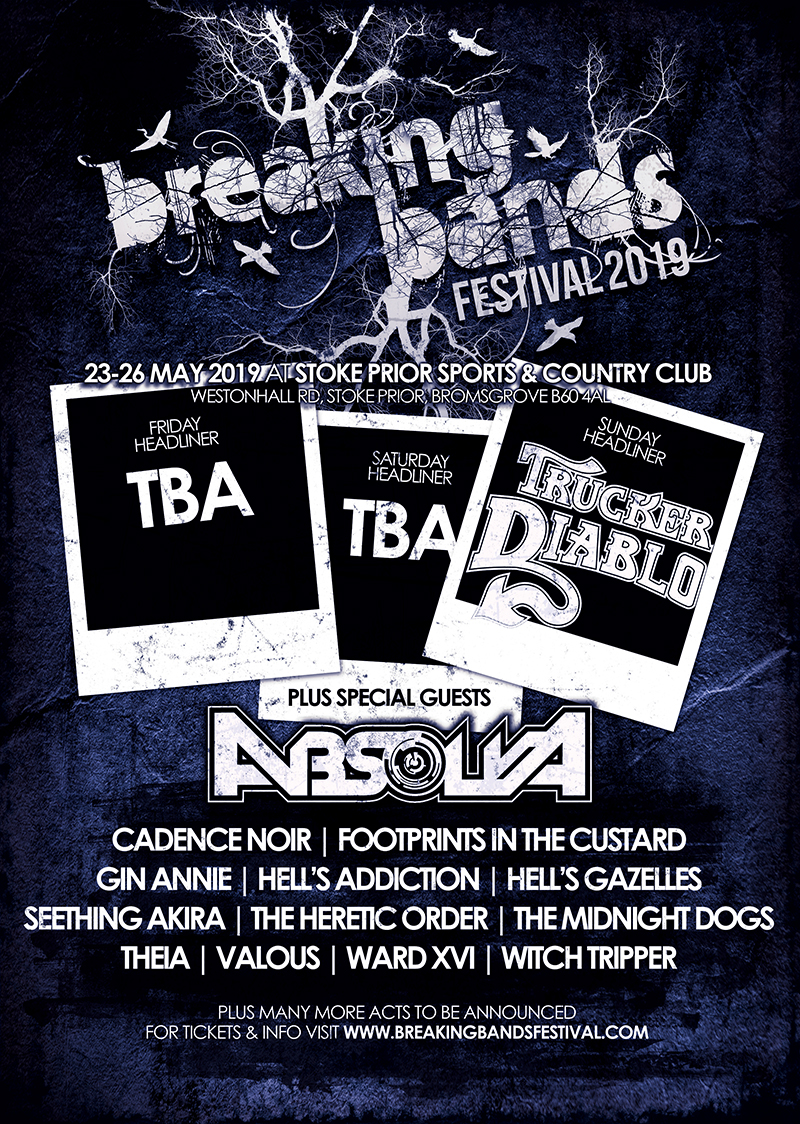 Breaking Bands Festival 2019, the 5th Anniversary of this celebration of unsigned and independent music from the UK and beyond.

As announced earlier in the year, the BBFest team have decided to make this a special one by inviting bands from the last 4 years to come back and play again. After all, this festival is about championing bands and what better than inviting them back years later and seeing how much they have developed since gracing the stages of Bromsgrove. Already confirmed is Irish rockers Trucker Diablo who were superb on their last outing at BBFest, they will return as Sunday night headliners and closing the weekend festivities. Also, a band that people have been asking for year after year, from Manchester we invite Absolva as our special guest band.

With 5 bands being invited back from 2015, 2016, 2017 and 2018 it is going to be one hell of an Anniversary party. Better still is the fact each of the bands have been personally chosen not by the festival crew but the paying public and our new Festival Foundation members.

So to the announcements. We are naming 3 bands from each year right now for you all. Lets start with year 1 and where it all began for Breaking Bands Festival.

2015:
Its with great pleasure we invite back Midland based rock bands Theia and The Midnight Dogs, along with London Metal band The Heretic Order. All 3 are superb bands and really did kick off the first year for us in style.

2016:
What a year this was! So excited to bring back ever present band members of Birmingham based Valous, alongside Leicester rock band Hell’s Addiction and one of the most popular bands of the year, Folk n roll band Cadence Noir.

2017:
Into our 3rd year and getting more established and busier, this was a tough pick for the fans. We are bringing bands those crazy but also fun boys from the North known as Footprints In The Custard. Along with them a band that blew so many people away, Portsmouth alternative/electronic band Seething Akira and to complete this trio, its a very welcome return to rock band Hell’s Gazelles.

2018:
Dubbed as the year that will take some beating in the festival line-up stakes, this was another really tough call for the attendees. Fresh in everyone’s minds, we had hundreds of votes for bands to bring back from this year. So we are so excited to announce the return of the theatrical metal band Ward XVI who really blew peoples minds with their antics on stage! We had a last minute call up for Midlands based rockers Gin Annie who only had a few days to prepare. Didn’t stop the crowd wanting more though! Finally, I think the festival directors would be shot if Witch Tripper didn’t get a well deserved invite back. 2 amazing sets in 1 day with possibly 2 of the biggest crowds of the weekend.

We will have more announcements in the near future with details of our Friday and Saturday night headliners (though all 12 bands announced could easily fill that role), news of band applications, our new outdoor stage and details of our new sponsor and partnerships.

Tickets are sellin extremeley well and as we have said for the first 4 years… it will sell out. So grab your tickets without delay and make sure you are there at the party of the year 2019!

From all of us at BBFest HQ…. keep on rockin!